G. H. Morling on the causes of suffering

One unforeseen development in the present pandemic is the rise of the coronavirus meme, from the hilarious to the deplorable, shared like viruses on social media. Laughter is an important and effective stress reliever in these times, and many of these memes are extraordinarily good at lightening the mood that otherwise might lead to distress.

When I realised on 10 March that Covid-19 was no ordinary disease and may turn out to be a defining moment in world history, I began collecting relevant social media memes available on the internet. I now have about 1,500 of these (after rejecting those that appeared racist, sexist, sexualised or blasphemous), and more appear every day. This one, for example, appeared in my Facebook stream on 7 April, the day after I published the first part in this series: 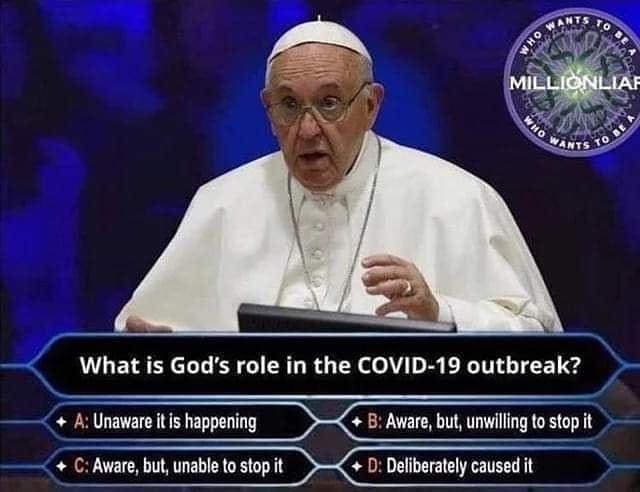 This is a fitting introduction to the themes I want to address here: what causes suffering, what purposes may be served by suffering, where is God in it all, and what is an appropriate Christian response to suffering?

The philosophical and theological issues that arise when we think deeply about suffering do little to maximise our happiness or ameliorate our experience of suffering, grief and loss. Most of us are content to avoid pain and loss where possible, to medicate our own suffering, and to insulate ourselves from its effects in others. We expend great effort in obtaining personal happiness and wellbeing, and avoiding suffering. Thinking long and hard about suffering, and reading what others have thought, is not a priority.

Perhaps one reason for this is that suffering is a moral as well as a physical and emotional problem. This is certainly the case for theists, and especially so for those of Judeo-Christian faith who think of God as omnipotent, omniscient and omnibenevolent. The reality of human and animal suffering, perhaps also the global effects of climate change and environmental degradation, and the prevalence of inequality and injustice, only intensify the problem.

Undeserved suffering suggests that God is not all-powerful, all-knowing and absolutely good – or at least not always and for everyone. If God possesses all of these qualities but fails to answer the sincere prayers of good people pleading for divine intervention to alleviate suffering, what are we to believe about God and God’s relationship to the world, and to us?

One way forward is to consider the problem of suffering from two perspectives:

In this post, I’ll focus on two possible causes of suffering; and in my next post, on two more possible causes. Throughout this series of posts I’ll be reflecting on of the thought of Australian Baptist theologian G. H. Morling (1891-1974). But first, a digression on the place of experience in Christian thought, as Morling understood it.

The power of experience

One of the distinctive qualities of Morling’s thought was the strong emphasis he placed on experience. While like other evangelical thinkers he accepted sacred Scripture, church tradition and the power of reasoned argument as essential loci of authority, he also accords a significant role to personal experience.

Evangelical Christians may imagine their faith in cognitive terms, but faith is also profoundly experiential, it is primarily “a religion of the heart.”[1] Evangelicals of the typically maintained “genuine regard for the appeal of feeling and a reluctance to let form or symbol, or the externalization of institution or precedent, obscure the witness of experience.”[2] This accurately describes Morling’s orientation.

Even among Sydney Anglicans, well known for the intellectual robustness of their faith, the essence of evangelical piety arguably shifted “from the objectivity of the atonement to the subjectivity of the believer’s own experience” during the first two decades of the twentieth century.[3] Morling similarly appropriated subjective aspects of the Christian mystical tradition in his embrace of experience during the key years of his theological formation in the 1910s, and on through the inter-war years to mature adulthood.

For Morling, experience serves not only as subjective confirmation of the intellectual affirmation of the reality of God but as a direct source of knowledge of the divine. In this he reflects the thought of American Baptist theologian E. Y. Mullins and makes it his own.[4] Experience is also, of course, in Morling’s domain, a direct source of knowledge of the world, and the human world, and the world within. And when one encounters significant suffering, there are lessons to be drawn from the experience.

On the other hand, in lecture notes on the person of Christ written around 1945, Morling qualifies his emphasis on experience, saying, “It is urged in some quarters that Christianity is essentially an experience and that spiritual experience is independent of historic fact. The true position is that the Christian religion is a blending of the historical and the spiritual.”[5] Morling saw his approach to theology as “positive, forthright and balanced.”[6]

What, then, does Morling have to say on the causes of suffering? My first post outlined Morling’s practical credentials for reflecting deeply on suffering. This post begins to discuss his thinking on suffering and loss; the next post continues this line of enquiry, and notes further reflections on undesirable experiences in his life.

Suffering as misconstrual of reality

From a causative perspective, the experience of suffering may result from a mistaken understanding of the nature of reality; the unintended consequences of free will; the consequences of moral failure; or some supernatural cause such as demonic influence.

The first, and perhaps least satisfying, view is sometimes called the “harmony” view. It holds that much of the suffering we experience is not real but imagined, or if it is real then it is greatly exaggerated. According to this view, all suffering pales into insignificance before the beauty and rationality of the universe.

This is not a view supported by any theologian I have read, including Morling (who was, by all accounts, despite being a fascinating subject for my doctoral research, a rather minor evangelical theologian). As British theologian Frances Young notes, “Christian thought about suffering cannot be reduced to explaining it away, in however philosophically sophisticated a way.”[7]

Yet in a 1957 lecture on the doctrine of God, Morling discusses how one may reconcile confident trust in divine providence with what the British poet John Keats describes as “the Giant Agony of the World,” in his poem, “The fall of Hyperion.” He refers to Henry Herbert Farmer, who responds to the dilemma in his book, The World and God, by encouraging the pursuit of courageous effort in order to transcend negative circumstances.[8] Morling then writes, “A world which does not allow the possibility of frustration and defeat would never satisfy human nature as it is constituted.”[9]

Is this an allusion to the “harmony” doctrine, stated positively, or to a version of the free-will defence (mentioned below)? Morling’s lecture script continues, quoting Carnegie Simpson’s book, Facts of Life, in which the author observes that the ruthlessness of nature undermines human dignity and “in some of its activities appears to ‘depersonalise’ man.”[10] Morling responds, making three distinct points:

Thus, for Morling, we may say that the experience of suffering cannot be dismissed as a misconstrual of reality, inappropriately obscuring the fundamental beauty and harmony of the universe. Suffering is real, and ugly, and burdensome; yet nature is inherently beneficent, and God should not be used as a scapegoat for the problem of suffering. Perhaps a more convincing explanation lies in aspects of human nature.

Suffering as the fruit of free will

A second causative explanation for suffering is known as the “free will defence.” This explanation does not account for suffering that is directly attributable to natural disasters or clearly random events, but it does seek to account for suffering as a result of moral decisions. It holds that, since God is personal and desires a free and loving relationship with his creation, humans must be created with free will, and evil and suffering are unintended consequences of this arrangement. Humans possess the capacity to freely choose the good, but often abuse their freedom and choose paths that lead to evil and suffering.

Is there any evidence that Morling subscribed to this view? It is possible that he has this view in mind when discussing the problem of suffering apart from the ruthlessness of nature. His most detailed treatment of this – though not nearly as detailed as one may wish – is in his lecture on the doctrine of God mentioned earlier, where he distinguishes between “bodily” and “spiritual” suffering.[12] By “bodily” suffering Morling appears to mean both physical and psychological suffering.

Morling quotes Scottish theologian John Baillie, And the Life Everlasting; and Farmer’s book mentioned earlier,[13] and then quotes further (unattributed, but possibly Baillie or Farmer): “What is the significance of [one’s] personal life when a streptococcus can snuff it out in delirium and agony?” He does not develop this line of thought in the lecture notes, but may have intended to illustrate the opposite of the sentiment expressed in the Pascal quote earlier.

Moving on to “spiritual” suffering, Morling does not address issues such as the experience of religious persecution, “suffering for the sake of righteousness,” or redemptive suffering. Instead, he focuses on the development of “great souls” (a topic addressed in my upcoming post on purposive suffering). As part of his discussion here, Morling also argues that a valid Christian response to the observation or experience of injustice is that “the believing man can afford to await the outworking of God’s purposes and restfully commit his way to Him.”[14]

That conclusion reflects an approach to Christian life known as quietism, which is arguably unbecoming of an evangelical leader of Morling’s stature and learning. It implies a dualistic view of the world, an extreme form of individualism, and a settled powerlessness that ignores and tacitly suppresses the strong activism against injustice commended by the biblical writers and the classic evangelical tradition.

To be fair, while Morling could never be accused of being a social justice warrior, and while the range of ethical issues on which he chose to comment was relatively narrow, there is no conclusive evidence in his writings that he was committed to quietism. As to the view that suffering may result from the unintended consequences of free will, there is also no conclusive evidence that Morling definitely affirmed it. It is a valid and, in my opinion, compelling explanation for the cause of much of the suffering in the world, but it was not Morling’s preferred explanation.

Rod Benson is a Baptist minister and Research Support Officer at Moore Theological College, Sydney. This article may be freely reproduced in any form provided that proper attribution is made to this website.

[1]      Elizabeth Jay, The Religion of the Heart: Anglican Evangelicalism and the Nineteenth-Century Novel (Oxford: Clarendon Press, 1979).

[3]      Warren Nelson, T. C. Hammond: His Life and Legacy in Ireland and Australia (Edinburgh: Banner of Truth Trust, 1994), 97. This period coincided with the incumbencies of William S. Smith (1897-1909) and John Charles Wright (1909-1933) as Archbishop of the Diocese of Sydney, and Morling developed his Baptist ministry somewhat in the shadow of this religious culture.