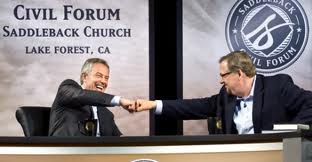 There’s a lot of talk these days, and a lot of space and airtime given by media to popular, muscular atheism – the idea that God is dead, or doesn’t exist. And many who do believe in God play down the significance of their faith for everyday life, or relegate faith to Sundays.

So it was something of a surprise to hear former British Prime Minister Tony Blair address the Saddleback Civil Forum last Sunday about faith, the Middle East, globalisation, and 9/11.

Mr Blair said faith was not merely “a distant relic of the past” but “part of the future and of progress.” He feared that a world without faith would deliver “a process of globalisation without values, without beliefs, without conviction.”

Mr Blair also claimed that the support of the west for America after 9/11 was about defending a belief system. It is dangerous to merge national interest with religious belief, but those who recognise the Judeo-Christian foundations of our laws and customs, our rights and freedoms, would be inclined to agree with Mr Blair.