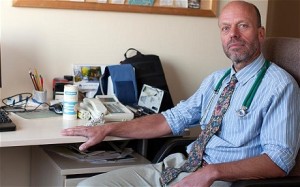 The stories are mounting up: stories of honest and sincere citizens expressing their faith in harmless ways, trapped and punished by well-organised bands of secularist zealots.

One of the latest victims is British GP Dr Richard Scott, aged 50, who has been censured by the General Medical Council for talking to a 24-year-old patient about Jesus. At the end of a lengthy consultation, Dr Scott suggested that faith in Jesus Christ could give comfort and strength.

This was reported by the patient’s mother, and viewed as breaching professional guidelines, and potentially exploiting a vulnerable patient. But the medical centre where Dr Scott works has six Christian doctors, and clearly advises on its website that spiritual matters are likely to be discussed with patients during consultations.

Dr Scott, formerly a medical missionary in Tanzania and India, says he will appeal the censure in order to give confidence and inspiration to other Christians.

There’s something deeply wrong with a society that denies people the freedom to express their faith in sensitive ways in the workplace.