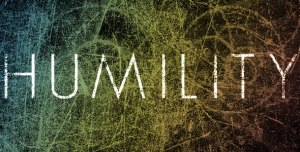 But in verse 3, Paul surprises us again.  We might have expected him to expound what he understood of God’s “good, pleasing and perfect will”; or about conformity to “the pattern of this world’; or more about what it means to be a “living sacrifice”; or how we experience God’s mercy in salvation and sanctification.

Instead, Paul says, “For by the grace given me I say to every one of you: Do not think of yourself more highly than you ought, but rather think of yourself with sober judgment, in accordance with the faith God has distributed to each of you.”  He commands all Christians to cultivate humility in their daily lives.

We all know what humility is, and each of us can probably think of people known to us whom we would describe as humble.  John Dickson, in a recent book on the subject, defined humility as “the noble choice to forgo your status, deploy your resources or use your influence for the good of others before yourself,” or, “a willingness to hold power in service of others.”[1]

Sports and entertainment stars aside, Australians have a grudging respect for the virtue of humility, and no one likes a show-off or a “know-it-all.”  But the world in which Paul was writing saw things very differently.  Ancient Greek and Roman culture typically respected honour and shame, and praised arrogance and boasting and self-congratulation.  There was no room for humility in the ancient world, and any would-be leader who was humble, or who encouraged humility, was generally swept aside and forgotten.

Except, of course, a man called Jesus.

As John Dickson observes, “the modern Western fondness for humility almost certainly derives from the peculiar impact on Europe of the Judeo-Christian worldview.”[2]

In his teaching and example, Jesus overturned established values and stereotypes.  It is not going too far to claim that he redefined the nature of honour, and recast the concept of greatness, during his short life.  Hear Paul’s words in Philippians 2:5-11:

In your relationships with one another, have the same mindset as Christ Jesus:

Who, being in very nature God, did not consider equality with God something to be used to his own advantage;  rather, he made himself nothing by taking the very nature of a servant, being made in human likeness.  And being found in appearance as a man, he humbled himself by becoming obedient to death – even death on a cross!

Therefore God exalted him to the highest place and gave him the name that is above every name, that at the name of Jesus every knee should bow, in heaven and on earth and under the earth, and every tongue acknowledge that Jesus Christ is Lord, to the glory of God the Father.

What would the Gospels be like if Jesus had come to our world but adopted the pride and arrogance that was typical of leaders of the time?  Part of the genius of Christianity is the radical humility Jesus displayed and commended.  When he emptied himself, he changed the world.  When he modelled his ministry on the ideal of radical servanthood, he was doing something counter-cultural, and laying the foundation for the character development of all Christian leaders who would follow him.

And what a foundation it is!  And what a challenge it brings!  American statesman Benjamin Franklin said:

There is perhaps not one of our natural passions so hard to subdue as pride.  Disguise it, struggle with it, beat it down, stifle it, mortify it as much as one pleases, it is still alive, and will every now and then peep out and show itself … For even if I could conceive that I had completely overcome it, I should probably be proud of my humility.[3]

And yet, in various places in the Gospels and the rest of the New Testament, God calls his people to embrace humility as Jesus did.

The call to humility is an important aspect of the transformation in thinking that comes with the new life we have through our link with Jesus.  Being transformed by the renewing of our minds (Romans 12:2) isn’t merely a mental exercise, and it’s about more than the individual.  Paul wants us to recognise that Christlikeness is not demonstrated in a vacuum, but in our relationships with others.

In his book, After You Believe: Why Christian Character Matters, Anglican New Testament scholar N.T. Wright puts it like this: “the New Testament envisages the holiness of God’s people as a major factor in their larger vocation to be the lights of the world.”[4]  And he goes on to explain that Christian mission doesn’t make sense unless it is preceded by Christian morality.  The virtues that constitute the high calling of Christian morality (such as the fruit of the Spirit, or the classic cardinal virtues) are the vital components of the still higher callings of Christian worship and mission.[5]

Do we want a deeper experience of worship?  Are we convinced that mission done right will advance the kingdom of God and bring glory to Jesus?  Then invest time and effort in cultivating virtues like justice, prudence, fortitude and restraint within a Christian theological framework. Or here, as Paul commands, practise humility.

The link with verses 1-2 is obvious: we should reject the kind of thinking that produces pride and arrogance, and embrace the kind of thinking that leads to humility in word and action.  At the same time, some of us fall into the opposite trap: we think too lowly of ourselves, either through a false humility (that is actually pride carefully concealed); or a failure to fully appreciate our identity in Christ, and what God is capable of doing in and through us.  The solution to both problems is to examine the direction in which our affections and decisions are taking us “with sober judgment.”

But what does the last phrase mean?  Some biblical scholars link it with verses 4-8, suggesting that it refers to an attitude based on the gifts and abilities God has given each individual.  But I think the meaning is clearest if we think of “faith” here as a strong, confident trust in God – something we all have access to in equal measure.

So what can we do to become more humble?[6]

The great author and apologist C.S. Lewis knew a great deal about both duty and virtue.  In his book, Mere Christianity, Lewis concludes his discussion on humility, and I conclude my sermon, with these words:

If anyone would like to acquire humility, I can, I think, tell him the first step.  The first step is to realise that one is proud.  And a biggish step, too.  At least, nothing whatever can be done before it.  If you think you are not conceited, it means you are very conceited indeed.[8]

[7] In saying, “Forget about being humble,” I am not suggesting that the attainment of this virtue is a temporary challenge to be mastered before moving on to some other challenge, or that one should ignore all the previous advice.  Rather, the point is that humility is a low-key virtue that does its best work in the background without drawing attention to itself or to the person expressing it.

One Reply to “The new way (sermon by Rod Benson)”